InkSmith, his Waterloo, Ontario, start-up was barely four years old and was operating with just 10 employees. 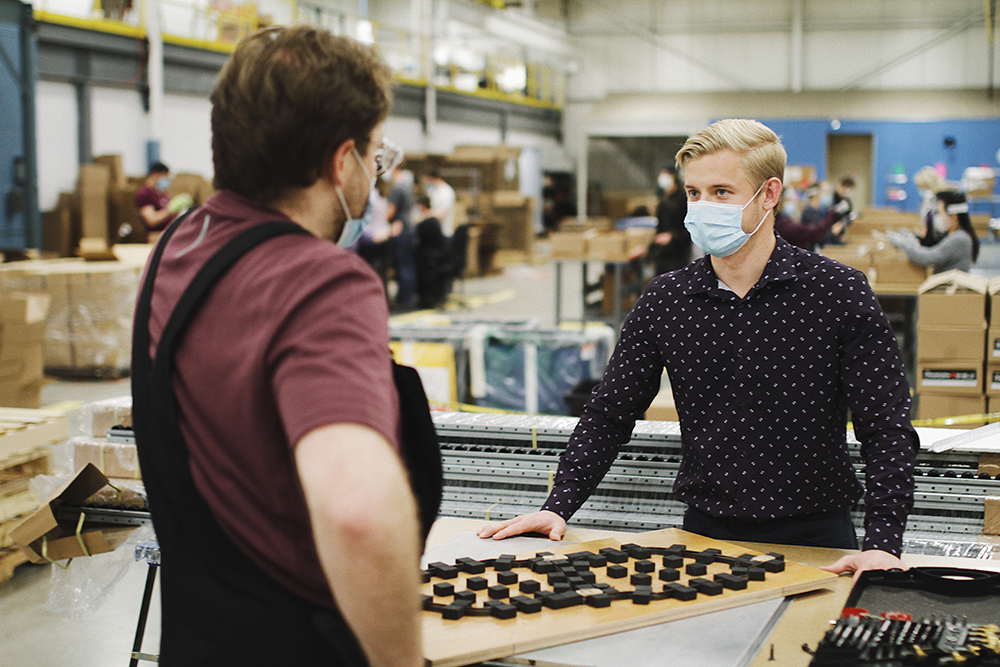 Jeremy Hedges: Not much sleep, but living the entrepreneur’s dream.

What happened next is the stuff of an entrepreneur’s wildest dreams, albeit brought to his door by a nightmare pandemic.

As COVID-19 became an increasing threat in Ontario, medical and other community leaders asked Hedges if his firm could help solve a chronic face shield shortage across the region using 3D printers. They had read an article about an Italian 3D printing firm producing small valves for hospital ventilators.

Hedges, 27, agreed to give it a try and the next day delivered his first face shields for testing at Cambridge Memorial Hospital. He nicknamed that first batch the Community Shield.

Barely a month later, his firm had transformed into one of the biggest, if not the biggest, producer of face shields in North America, producing hundreds of thousands of reusable, recyclable plastic shields a day. 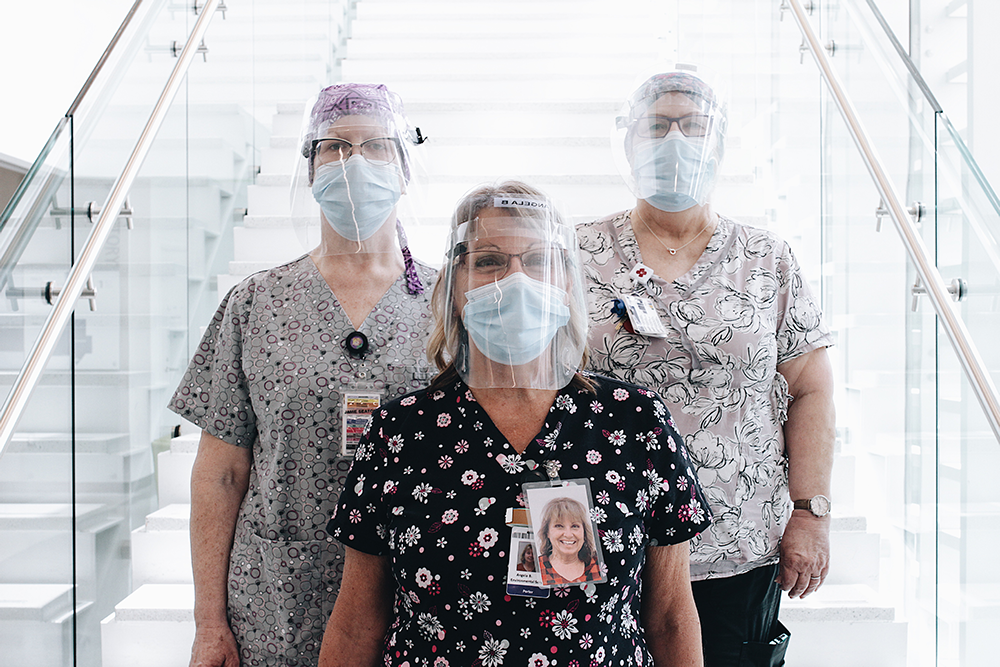 By the end of April, they had produced more than one million. By mid-summer they will be up to 12 million and when the Canadian need is met, an overseas market is beckoning.

Hedges recalls a dizzying series of events that began with InkSmith producing shields for local hospitals, along with other 3D printer owners in the region who had responded to his call for help. That was quickly followed by the realization that even if all the 3D printers in the province were working flat out 24/7, they were too slow to meet the tidal wave of demand.

Hedges and his team developed a laser-cut version of the shield using a modern, automatic version of stamping technology that has been a staple of industry for more than a century. The new versions, dubbed The Canadian Shield, playing a key role in supporting the Government of Canada, are made from thin plastic that can be disinfected, reused and recycled.

Along with smaller contracts to supply an array of local and regional health authorities and health providers across the country, Hedges signed a major contract with Public Services and Procurement Canada to produce around 10 million shields for the Public Health Agency of Canada.

The firm’s staff of 10 quickly grew to more than 200, with most of the new employees working in shifts around the clock on ‘travelling head presses’ at the firm’s production facility. The workforce will have grown to around 300 by the end of May. 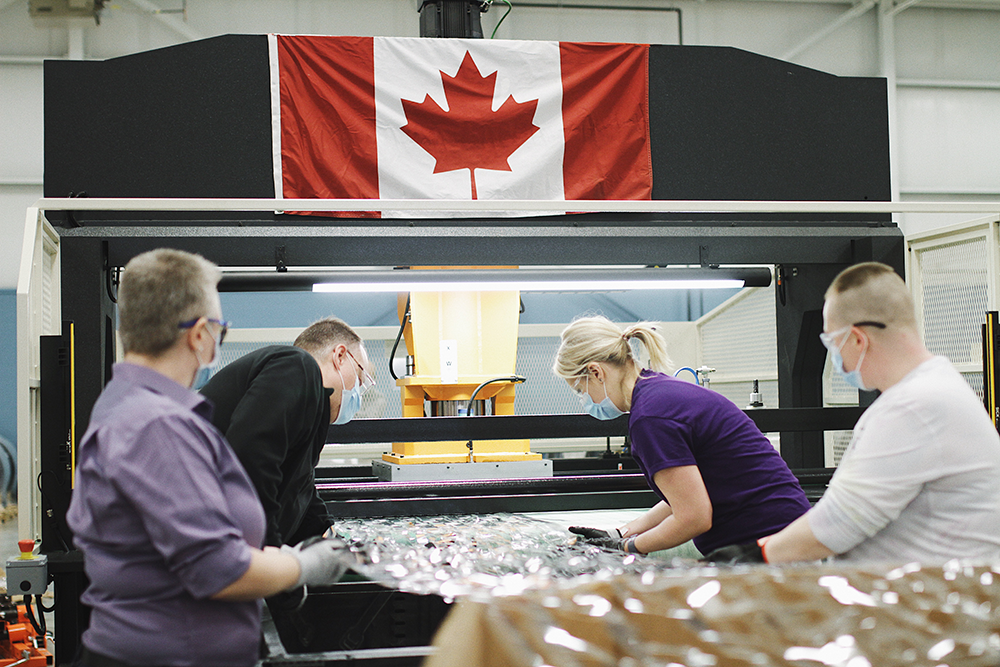 InkSmith turned to a new version of old stamping technology to meet the PPE demand.

Hedges has a lot of potential employees to choose from. The firm had received 6,000 job applications by April.

“It’s difficult to even get through all of those resumés,” he says, “but it’s an honour to be able to put some folks who have lost jobs because of the pandemic back to work in meaningful jobs.”

Unlike most technology entrepreneurs, Hedges is not an engineer. He graduated from Waterloo’s Wilfrid Laurier University with a degree in international development and politics and started building 3D printers as a hobby a half dozen years ago.

“I guess you could say I’m a bit of a techie nerd with a global view,” he says.

Far from closing up shop when the need to combat COVID-19 diminishes, Hedges sees a bright future for his firm and other Canadian medical equipment manufacturers.

“The pandemic has exposed so much unreliability and difficulty in sourcing personal protective equipment (PPE) from foreign suppliers,” adds Hedges, “that developing a made-in-Canada solution makes sense.”

“I see a long-term commitment to bring PPE production back to Canada,” he says. “Face shields won’t always be in such astronomical demand so we will be investing in other equipment so when another crisis hits, we will have the capacity to provide Canadian health care workers with what they need, right here on our home turf.”

A re-vitalization of Canadian manufacturing is one of the few positives that will emerge from the pandemic, he reasons.

“PPE is one part of it,” he says. “But all essential things Canadians need can be made here and will be made here. We have the natural resources, the skilled labour and we’re one of the wealthiest nations in the world.

“So we need to make the investments necessary to create that long-term manufacturing base and insulate ourselves from future crises and to protect ourselves from a global supply chain that isn’t making us a priority.”

But that’s for another day. Hedges and his team still have millions of shields to produce.

It’s been a hectic few months for the entrepreneur and the pace isn’t going to slow any time soon.

“I still haven’t quite wrapped my head around how all this has come together,” he says, “but it’s been a pretty wild journey. I’m loving it.”