Fluid Energy CEO Clay Purdy heads a company whose mission is to make the world a cleaner place.

The Calgary-based chemical processing and manufacturing firm has experienced rapid growth since its founding in 2011. Working primarily with the oil and gas industry, it developed relationships internationally with major oil-producing countries, taking commodities such as hydrochloric acid—a rock-dissolving drilling agent—modifying it to greatly reduce its corrosive and hazardous impact and selling it back for continued use. 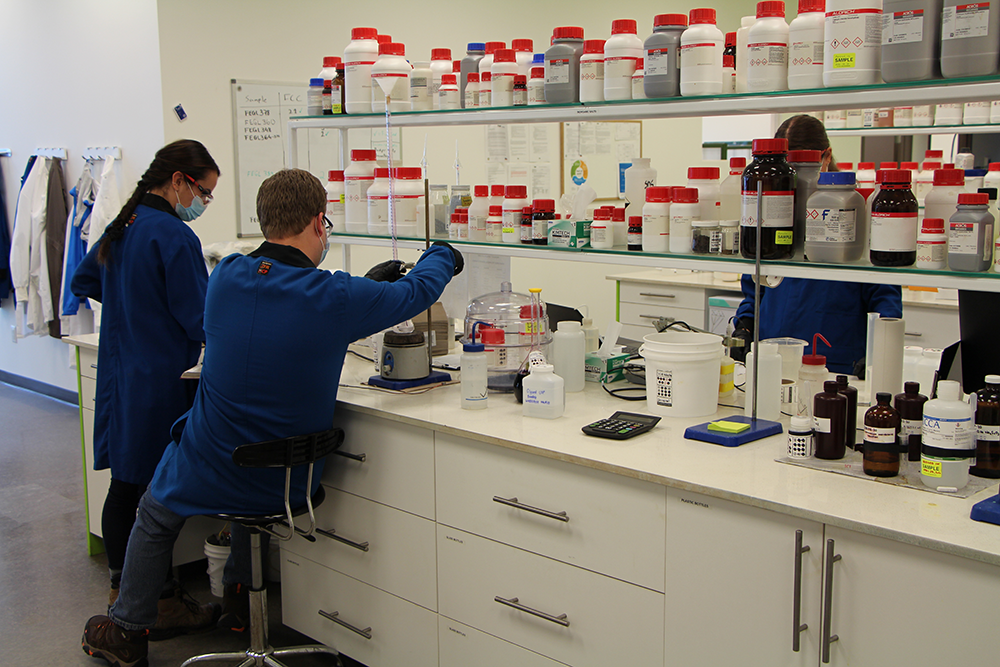 Aside from the oil and gas industry, Fluid’s diverse customer base includes the concrete and food industries, water treatment plants, nuclear power plants and the U.S. Navy.

Its consumer cleaning products are sold throughout Canada—notably in big-box stores such as Canadian Tire—under the brand name Triton. Boat cleaner is one of its older products.

“Everyone wants environmentally cleaner and safer options, which is what we focus on,” said Purdy. “We don’t replace what they use now but we modify it and sell to them with the added technical advantage.” 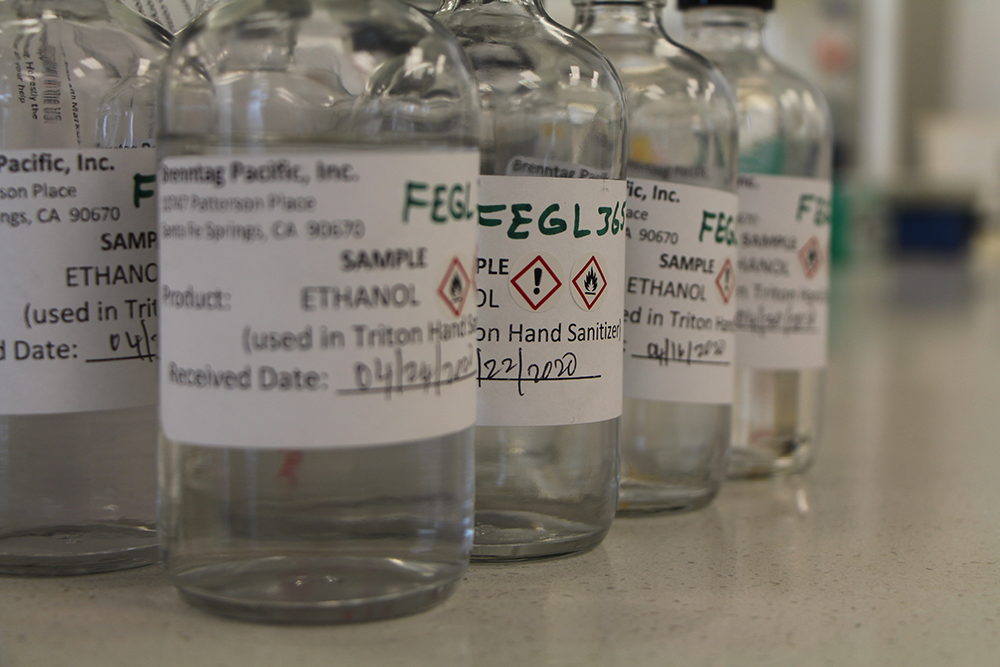 All of which made Fluid Energy an ideal candidate to produce millions of litres of hand sanitizer for the federal government under a contract it signed in early April.

The company has already shipped more than 5 million bottles of 950-ml hand sanitizer across Canada, some of it temporally stored in the company’s warehouses, and will be filling the remaining of the order in the next few weeks.

“Our ability to produce the hand sanitizer is greater than customers’ ability to store it,” said Purdy. “Hospitals, for example, can only stock so much, so we’ve offered to house the reserves at our warehouses.”

Not that the transition to hand sanitizer was totally seamless.

The company had worked in disinfection several years ago when they developed a cure for hoof warts in cattle.

“We didn’t pursue it because we got busy in the oil and gas industry,” said Purdy.

“Hand sanitizer was a different product for us, so there was a learning curve on the science side,” he added. “But a lot of the key points were already in place, so we were able to jump into this very aggressively and quickly. Plus we deal in such massive volumes for the oil and gas industry, so logistically we are able to manage these volumes of hand sanitizer quite easily.”

The company already had a Canada Revenue Agency licence to deal in ethanol, a crucial hand sanitizer ingredient.

Before COVID-19, Fluid had seven full-time scientists, which rapidly grew to 18 after the federal contract was signed. The plan, said Purdy, is to have 30 full-time scientists and engineers with 20 of them overseeing hand sanitizer and disinfectant development.

“We’ve been able to grow while producing the hand sanitizer,” he said, “so we haven’t had to stop any of our other business. It wasn’t a complete pivot for us.” 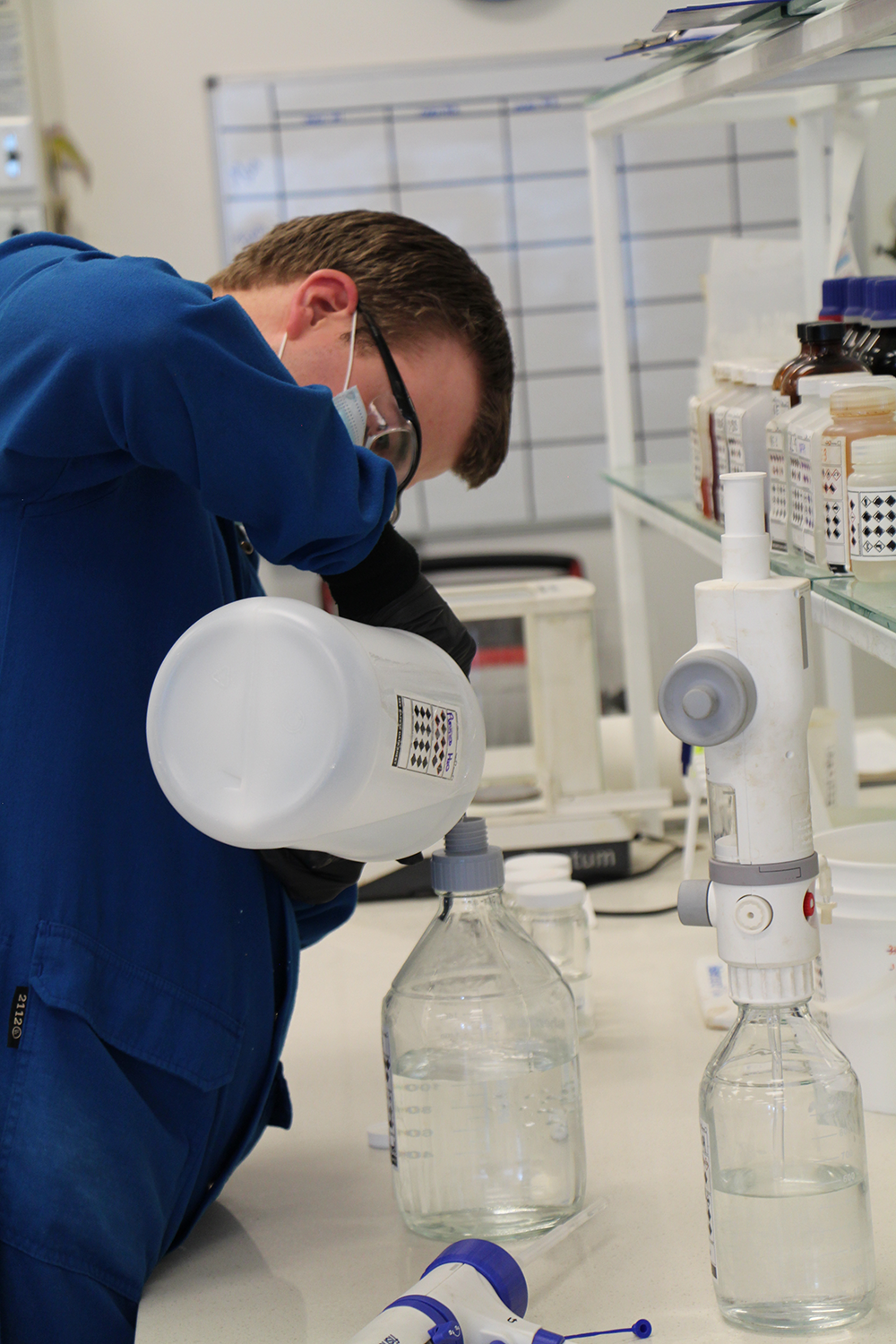 Hand sanitizer comes in different versions. All use some form of alcohol, including isopropanol (IPA) which, said Purdy, is in short supply and has increased in price between 500% and 700% since COVID-19 hit.

Fluid uses ethyl alcohol sourced from the Red Deer company Permolex, a food processor for which ethanol is a by-product.

“We use 80 percent ethanol alcohol, which is very high and very effective at killing bacteria and dealing with viruses,” said Purdy.

Fluid’s sanitizer also includes distilled water and a small amount of hydrogen peroxide to stabilize and give shelf life to the product, along with glycerol, which is a moisturizer.

“If you’re using hand sanitizer dozens of times a day, you need it so your hands don’t dry up.”

Some versions of hand sanitizer contain a food-grade jelly substance, said Purdy, which is fine for those using it just a few times a day.

“But if you use a gel sanitizer multiple times a day,” he added, “you’ll get a build-up on your hands that will actually block the alcohol from getting to your skin and sanitizing your hands properly. It creates a polymer layer. If you rub your hands hard and fast, you can see it peel off.”

According to Purdy, Fluid Energy’s sanitizer, and its first surface disinfectant due to go into production shortly, is requiring millions of dollars in capital investments and, when hiring is complete, up to 80 new employees. About 20 percent of the firm’s revenue is being spent on research and development and patent technology.

The Government of Canada contract, and the seal of approval it represents, has helped spark interest internationally, including among Fluid’s current overseas network. Agencies of several governments, including Saudi Arabia, United Arab Emirates, India, Europe and the U.S., are already inquiring about the cleaning products, said Purdy.

Fluid is already selling to many blue-chip big-box stores and negotiating with others, along with airlines, hotel chains and cruise lines.

“It’s definitely a long-term term business for us,” said Purdy.