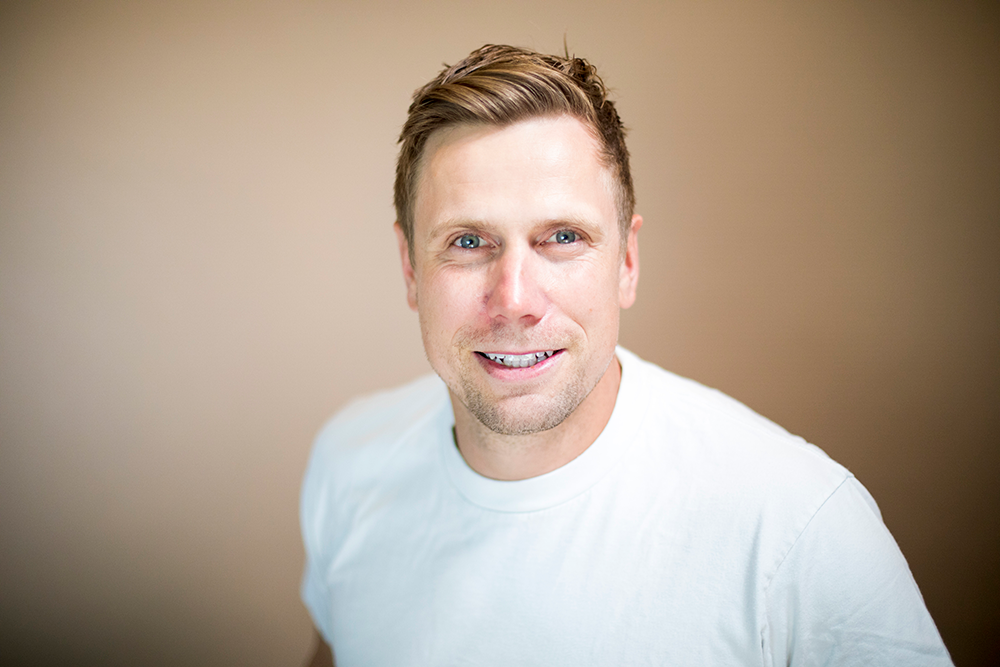 James Yurichuck: From the Canadian Football League to the garment business.

According to company legend, outerwear clothing manufacturer WUXLY was born from necessity.

Founder James Yurichuk had played four seasons and won a Grey Cup with the BC Lions before signing with the Toronto Argonauts in February 2013.

So Yurichuk, a self-described fan of all things Canadian, headed out to find her a winter coat.

Originally WULLY, the company name was changed to WUXLY to avoid a perception that the animal-free products contained wool.

He wanted a coat that was Canadian designed and manufactured and made of quality material. It had to be environmentally and animal-friendly and, of course, warm.

Yurichuk couldn’t find a coat to match his personal specifications, so he sought help from a master tailor friend, who made one for him—the first sample in what would become the WUXLY line.

“We’re always trying to be progressive,” says Yurichuk, “and we want to be at the cutting edge of sustainability. This year we’re including a lot of biodegradable materials, so at the end of its life cycle, that jacket is going to do minimal damage to the planet.” 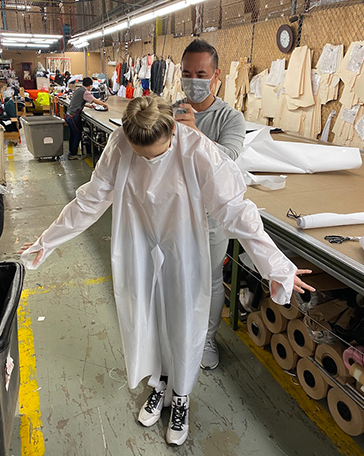 Trying it on for size.

WUXLY suddenly found itself in the reusable medical gown business in April following a call to members from the Canadian Apparel Federation.

“Within hours, we mobilized an alliance of manufacturers we already work with—about seven or eight companies,” says Yurichuk. “We had a Zoom meeting and decided how best we could tackle this project together. Within a couple of weeks, we were able to obtain our licence with Health Canada.”

The Toronto-based company has a Government of Canada contract to provide more than a million reusable gowns with an expected completion date of mid-October.

Yurichuk, from a blue-collar background in Brampton, Ontario, says he is particularly proud that the entire process—from design and pattern making, to end-of-line production and distribution, is completely Canadian.

“Work had suddenly ceased (because of COVID) for our manufacturing partners,” he adds. “Orders were cancelled, and they had to send their workers home. I have so much respect for the apparel manufacturers across Canada because it takes a lot of blood, sweat and tears just to keep these factories going.

“So it’s an honour to be partnering with them to make these medical garments for our frontline workers and keep them—and the public—safe.”

Design and quality assurance are key to all personal protective equipment because of Health Canada’s rigorous standards. WUXLY’s gowns will be distributed across Canada, primarily to hospitals and clinics.

In praise of “backline” workers 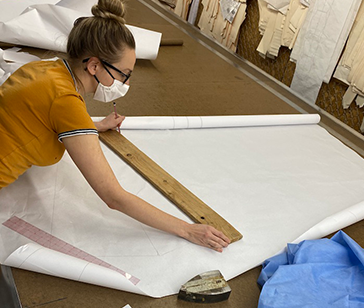 “We are testing the limits of Canadian manufacturing,” says Yurichuk. “The manufacturing partners are working through evenings and weekends, and they deserve a lot of credit.”

Many of the workers on the production lines are immigrants skilled at sewing.

“Sewing is a lost art in Canada,” says Yurichuk, “and looking ahead, we need more people with that skill. We can’t always rely on other countries to help us out in an emergency. I’ve been saying for a long time that we need to re-shore manufacturing in Canada, and that will always be a mission at WUXLY.”

The initial 7 or 8 manufacturing partners in the gown production has grown to 15.

Or as Yurichuk puts it: “We’re getting every needle going that we can.”

And what of Daniela, his Brazilian girlfriend?

She survived that first Toronto winter in her new coat. The couple eventually married and now have three children aged six, four and one.