Learn how the Contract Security Program will guide your organization through the requirements to secure your work site and obtain a document safeguarding capability (DSC).

Why you need to secure your work site

A secure work site is designed to prevent, delay and respond to unauthorized access to sensitive work sites, information and assets.

If your organization is required by contract to store sensitive government information and assets, you will need to obtain a DSC through the Contract Security Program.

The program will conduct a site inspection before granting clearance for DSC. This will identify what is required to secure your work site, information and assets.

Before the inspection: what to expect

In preparation for the inspection, the field industrial security officer (FISO) with the program will review the following documents:

You will be asked to review and complete a security guideline package, the required forms, and a pre-inspection questionnaire. The FISO will also request a detailed floor plan in order to perform the security inspection.

Consult the floor plan and hierarchy of zones diagram.

During the inspection: what to expect

Although there is no cost for the inspection, organizations must pay for the cost of any equipment or construction required to safeguard information and assets at their work sites.

The FISO will identify:

During the inspection, the FISO will require authorization and access from your organization to photograph the following:

After the inspection: what to expect

Inspections may be conducted at any time throughout the life of the contract. If your organization does not comply with contract requirements, security clearance may be denied or terminated.

Your organization can begin work on the contract once the:

Security orders are required for organizations with DSC. It must be submitted to the FISO before being granted clearance.

Security orders are a document that your organization will create and use to:

It must state that employees:

All employees of the organization are required to carefully read these security orders before signing the acknowledgment at the end of the document.

Organizations must ensure that all employees, contractors and subcontractors such as cleaners and maintenance workers are properly cleared and are escorted at all times when they enter security zones.

The FISO from the program will provide storage recommendations. If necessary, the FISO will assist you in ordering cabinets approved by the Royal Canadian Mounted Police (RCMP). These cabinets are required for storage of classified and Protected C federal government information and assets.

Floor plan and hierarchy of zones

A detailed floor plan must be completed before an inspection can take place.

Your detailed floor plan should identify the following:

You will need to create a hierarchy of zones to control who can, and cannot, access sensitive information and assets at your work site. These zones must be shown on your floor plan, as illustrated in the images below.

Organization of zones and example of a floor plan 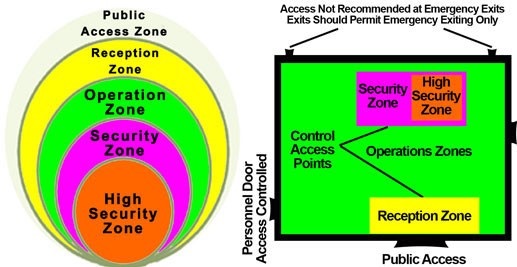 Information, whether paper or electronic, should be marked to identify it as protected or classified. Organizations should follow government standards for marking protected and classified information.

Sensitive information and assets are destroyed at the end of their life cycle to preserve their confidentiality. This is required for original documents, copies, drafts and notes—any document that includes protected and classified information.

Organizations must use the services of a company with classified shredding capability, and obtain a certificate of destruction once completed

Return to the program for disposal or shredding

The Contract Security Program inspects shredding companies annually. They must be cleared for shredding capability to the level of the information being stored at their facility.

Mobile shredding trucks can be approved to shred protected level information and higher if they meet RCMP standards. In addition, cleared employee of the organization must be present to:

The company security officer (CSO) must ensure that the shredding company is cleared to the appropriate level with the program.

A certificate of destruction must be obtained from the shredding company after the materials are destroyed.

Destruction by incineration may only be done by an RCMP-approved incinerator.

When your organization is required to store sensitive Government of Canada (GC) information and assets, it needs to obtain a document safeguarding capability (DSC) through the Public Services and Procurement Canada (PSPC) Contract Security Program (CSP).

Before an organization can obtain a DSC, it requires 1 of the following 2 clearances (valid):

Note: A DSC clearance level cannot exceed that of the organization clearance.

DSC is site-specific and may result in a physical inspection by a field industrial security officer (FISO).

There is no cost for inspections, but organizations must pay for the cost of any equipment or construction required to safeguard information and assets at their worksite as per the CSP and contract security requirements.

Organizations are required to develop security orders with the assistance of the FISO. They must be submitted to the FISO appointed to their organization.

Information technology (IT): The authority to produce, process and store protected or classified information electronically is subject to PSPC approval.

For organizations with DSC, a minimum of 2 security officers, cleared to the level of DSC are required at each of the secure work sites.

Production: Production is a broad term that can encompass organizations required to build, manufacture, repair, retrofit or reproduce sensitive material or products at its site or sites.

The Communications Security Establishment is Canada's national COMSEC authority and is involved in granting COMSEC clearances.

IT security, production and COMSEC are contract-specific and only valid for the duration of the contract.

A FISO with PSPC will review the following documents:

The FISO will identify:

The FISO will take or request photographs of:

The organization can begin work on the contract once the inspection process is complete and the organization has been notified by PSPC in writing that they possess the required security level.

Inspections may be conducted at any time throughout the life of the contract.

Inspection timeframes will vary based on security levels and an organization's ability to comply with PSPC's recommendations.