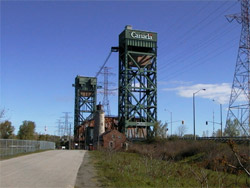 There were five different moveable bridges located on this site since 1830. The present bridge was opened in 1962 and carried two lanes of vehicular traffic across the canal. This structure originally had tracks for the Hamilton — Northwestern railway which were removed in 1982 when the road way was widened to four lanes.

The bridge structure is a tower driven, vertical lift and moveable bridge. The lift span is 116 metres long, weighs 1,996 tons and has a vertical lift of 33.5 metres.

The navigation season usually runs from late March to late December. During the winter shut down, the bridge staff overhaul the tower drive gear.

Since its installation, the bridge has been operated in excess of 166,380  times, allowing the passage of over 250,000 vessels. On a yearly basis, the bridge will operate approximately 4000 times allowing approximately 6500 vessels to pass through the canal; this includes more than 1000 cargo-carrying vessels.

The bridge lifts on-demand for all large vessels and on the hour and half hour for pleasure craft. In order to ensure safety, the bridge must be raised early since in the event of a failure, we need to provide the vessel time to turn since a fully loaded vessel can take in excess of a mile to stop.

Motorists who have questions about current and upcoming closures or lane reductions on the Burlington Canal Lift Bridge can consult the Media advisories webpage for more details.

The drives and controls and overhead cables project

The Burlington Canal Lift Bridge is undergoing a four-year project to replace the drives and controls for the lifting mechanism and related works. The bridge’s controls, drives and associated electrical components have been in operation for over fifty years and have reached the end of their service life. The proactive replacement of these components will alleviate the risk of failure and emergency repair and improve the performance of the bridge.

The project objective is to replace the bridge’s outdated control systems, main drive motors and overhead cables. The project will also address other required modifications such as an upgrade of the bridge’s electrical and mechanical systems, along with structural works required to complete these tasks. The completed project will result in more efficient operations, increased safety and reduced energy use.