2018 to 2019 Annual report on Government of Canada Advertising Activities

In accordance with the Policy on Communications and Federal Identity, Public Services and Procurement Canada produces the annual report on Government of Canada advertising activities. All figures are exclusive of tax and apply to government institutions included in Schedule I, Schedule I.1 and Schedule II of the Financial Administration Act.

The publication may be reproduced for non-commercial purposes only. Prior written permission must be obtained from PSPC for all other use.

The Annual Report on Government of Canada advertising activities is available online.

Since 2016, digital media has become the most used means to provide Canadians with information on products and services, and not just in government. This year, 53% of the total media expenditures of $43.04 million was spent on digital media (total advertising expenditure were $58.60 million). Of that 33% was spent on social media, with the biggest investment being in Facebook Inc. But unlike the trend of previous years, where the largest investment in digital media was in social, this year the Government of Canada invested more in other forms of media in an attempt to offset this trend. In 2018 to 2019, $2.5 million more was invested in Internet display advertising than on social media. Along with this, the Government of Canada also increased spending in other domestic media including, $2.4 million on print and a further $9.1 million on television, reversing the trend of previous years.

The Government of Canada also developed a new purchasing model to support our domestic media, particularly those that Canadians relied on to provide factual information and that employed traditional journalistic values. We worked with the Agency of Record (AOR) to establish the Canadian Private Programmatic Marketplace. The Marketplace is a grouping of high quality, major Canadian digital platforms that can be used to help the Government of Canada achieve awareness objectives in its advertising campaigns. In 2019, campaigns piloted the Marketplace and the results were promising. The cost for the premium inventory for these campaigns was significantly less than the norm, and because they were positioned on sites that many Canadians know and trust, the viewability of the campaigns was very high. 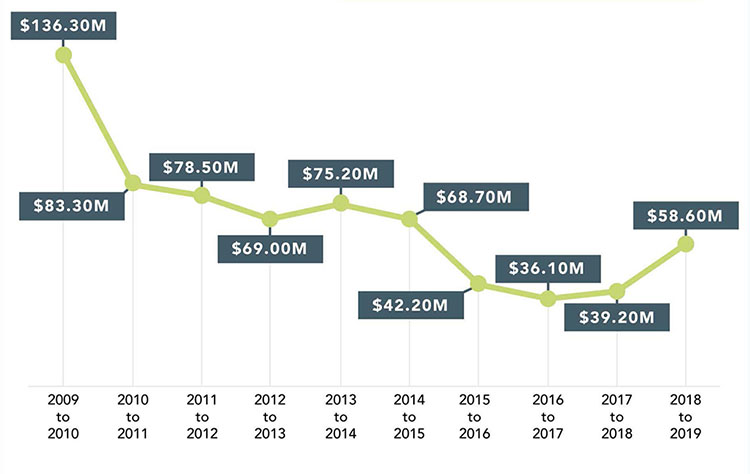 Table 1: Advertising expenditures with and without the Agency of Record Footnote 1

Media expenditures with the Agency of Record Footnote 2 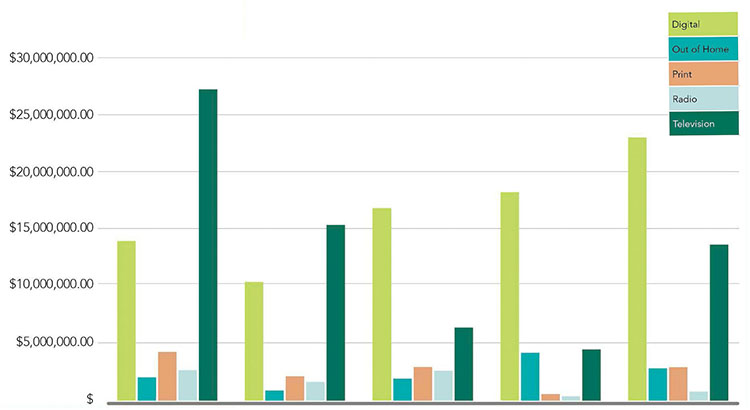 Figure 3: Government of Canada 2018 to 2019 media expenditures by type 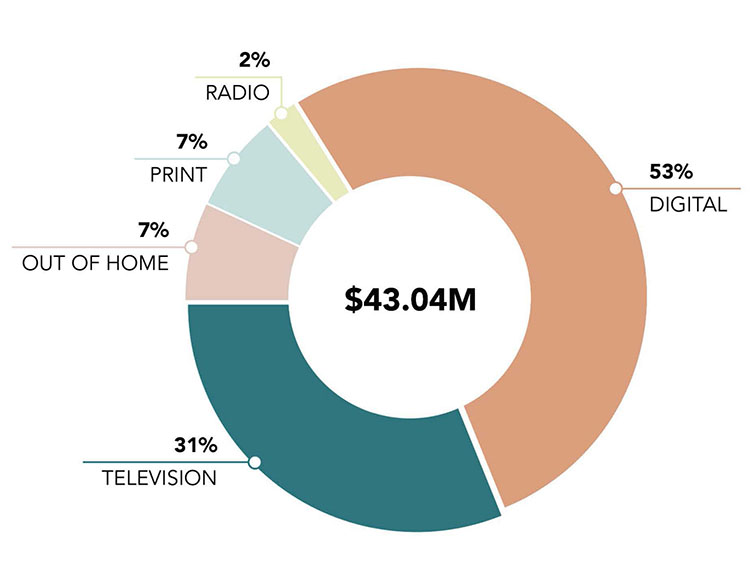 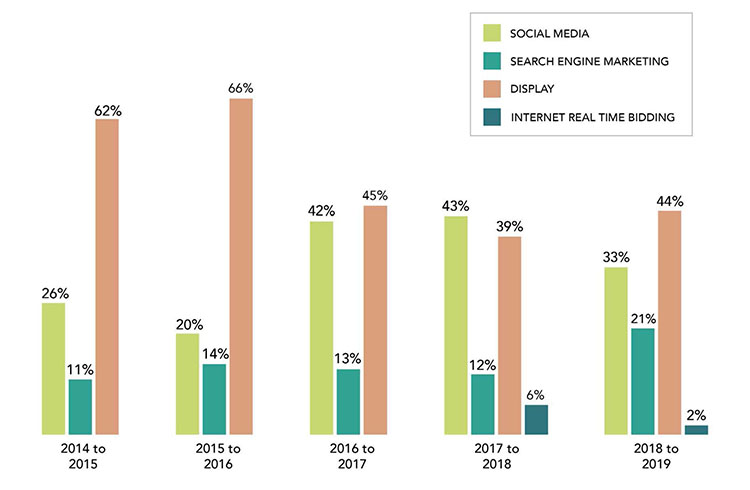 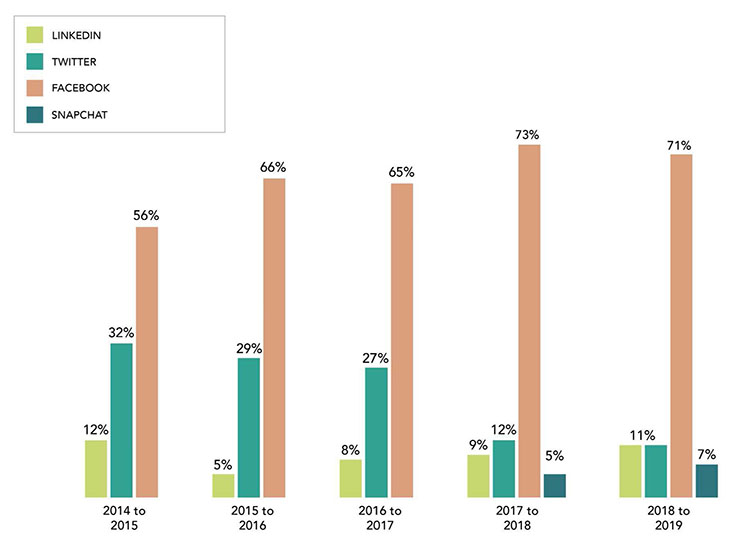 Advertising to Canadians in both official languages

Reaching Canadians in both official languages is a requirement for Government of Canada advertising. The Government plans advertising campaigns to align with the most recent Canadian Census data from 2016 which is approximately 75% English and 25% French.

Throughout the year the Government of Canada undertakes advertising to reach ethnic, Indigenous audiences within Canada, as well as international audiences including potential newcomers to Canada. 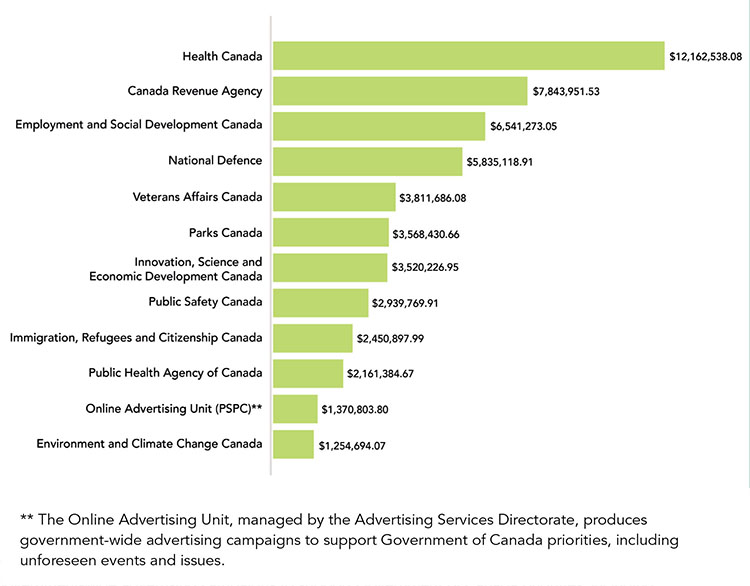 Appendix I: Government of Canada advertising process—Who does what

The Government of Canada has an obligation to inform Canadians about its policies, programs and services, about their legal rights, and to alert them to environmental, public health and safety issues. Advertising is one way the government does this. A rigorous process, involving many organizations, is in place to ensure that advertising activities align to government priorities, themes and objectives, comply with policies, procedures and legislation, and meet the information needs of Canadians. Government of Canada (GC) advertising is conducted according to the Policy on Communications and Federal Identity. The roles of the organizations involved in the process is described below.

Departments and other portions of the federal public administration operating under Schedules I, I.1 and II of the Financial Administration Act develop their advertising plans based on the organizations and Government of Canada’s priorities, and work with the Privy Council Office to obtain Cabinet approval. They work with PSPC to contract an advertising agency to provide a creative strategy and materials, and the Agency of Record to provide a media strategy and plans. Institutions are responsible for managing all aspects of their advertising activities, ensuring that their campaigns reach their target audiences with the appropriate message at the correct time, using media appropriate to reach their audiences. Along with this, they are responsible to ensure that all communications adheres to the Official Languages Act. And they are responsible for evaluating the effectiveness of their advertising efforts. At the end of the fiscal year they report their yearly spending to PSPC.

Treasury Board of Canada Secretariat

Treasury Board of Canada Secretariat (TBS) issues administrative policies including the Policy on Communications and Federal Identity which governs communications activities, including advertising. It manages the Treasury Board submission process to secure advertising funding for departments. The policy aligns Government of Canada communications practices with today’s digital environment, and includes a requirement that all communications products and activities, including advertising, be non-partisan. All advertising campaigns with budgets over $500,000 must undergo a mandatory independent external review to ensure that they are non-partisan. Review results are posted on Canada.ca.

Any message conveyed in Canada or abroad and paid for by the government for placement in media, including but not limited to newspapers, television, radio, cinema, billboards and other out-of-home media, mobile devices, the internet, and any other digital medium.

A private sector supplier selected through a competitive process to provide a government institutions with advertising services, such as strategic planning, creative and production services in support of an advertising initiative.

A private sector supplier, selected through a competitive process, which maintains various platforms to serve, track and report on federal digital advertisements, including an ad server to host and serve display advertising, a demand-side platform for programmatic advertising buys, and a data management platform with standardized information on campaign performance and results.

The electronic-tendering system used by the Government of Canada to post searchable procurement notices and bid-solicitation documents for access by suppliers and contracting officers. For more information, please see buyandsell.gc.ca.

Advertising in different text, image and audio formats, such as banner or big box ads published on a website for viewing by site visitors.

The purchase of advertising space and time from a media outlet, such as a television station, radio station, newspaper, magazine, website, cinema, out of home, etc.

In the context of all Government of Canada communications products and activities, non-partisan means:

Advertising media to which audiences are exposed outside the home such as mall posters, billboards, bus and transit-shelter advertisements, digital screens and kiosks, etc.

Paid advertising option on social media platforms to increase the likelihood of an institution’s post being seen by a key audience.

A formal government document, posted on buyandsell.gc.ca, through which advertising services suppliers are invited to submit proposals for creative advertising work on complex thematic and multi-component projects usually spanning more than one year. Proposals are evaluated according to criteria detailed in each Request for proposal (RFP). Contracts are awarded through a competitive process in which selection is based on a combination of technical score and price offering best value.

A form of advertising used to promote websites and attract visitors by increasing their visibility in search engine results, on search engine platforms.

An invitation to readers

This report has been compiled to inform Canadians about the advertising activities undertaken by the Government of Canada in fiscal year 2018 to 2019.

The government welcomes your feedback.

Media expenditures do not include production costs or fees.